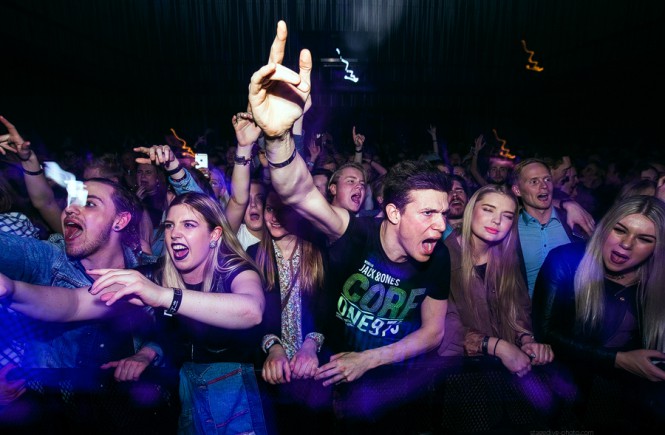 Time goes by quickly, especially when you’re having a good time. And so it was already saturday before you knew it, the final night of Sónar Reykjavík 2016. Packing bags for the flight early on sunday in the morning, checking out from the beloved and once more cozy KEX Hostel, some strawling around Reykjavík and then heading back to Harpa with slight delay. But still in time for the first of a whole row of Icelandic Hip Hop acts which definitely put their mark on that last evening!

For me, GKR really is the most promising act I’ve seen at Sónar this year. I was already positively surprised about his huge fanbase at his gig at Iceland Airwaves last year. I’m still learning Icelandic and it’s too bad I can hardly understand the lyrics. But GKR is true and authentic. No bullshit, no acting and no fake. I loved the energy he brought on stage from the first second he entered it. And he really made use of the big stage as he danced around and invited the audience to dance around with him. Amusingly he showed all none Icelandic people how to dress in the winter using layers as he started his show wearing a coat and ended it only wearing a shirt (and his his jeans of course). Unfortunately I couldn’t get one of his signed cereal boxes he threw into the crowd. Nevertheless the show was awesome. Thank you! I definitely want more of this.

The only non-rapping Icelandic act of the evening for us was President Bongo right over at Silfurberg hall, the former founding member of electronic icons GusGus. Keeping in mind his cool set at Lucky Records last November we were keen on watching this guy together with his fellow musicians, calling themselves The Emotional Carpenters. Their experimental electronic sound was enriched by organic instruments like a guitar or conga drums and combined with dazzling visuals, arguably the most spectacular ones during those three days. However the set was unfortunately not extremely well attended by the crowd who was rather going down with Sturla Atlas next door in Norðurljós hall.

We just dropped in for the last few songs of this critically acclaimed newcomer and obviously the crowd was also very much into his performance. Supported, among others, by Unnsteinn Manuel Stefánsson from popular party band Retro Stefson, the boys turned the audience in a boiling pot of sweating and screaming dancers. The set was similar in intensity like GKR before and one of the most awaited acts of the festival that was still to come.

Due to the cancellation of LE1F’s gig, the Hip Hop icons of Úlfur Úlfur where not only our next but sadly also our last Icelandic act of this year’s Sónar Reykjavík festival. Usually a two headed group, Arnar Freyr Frostason and Helgi Sæmundur Guðmundsson lately whip up support by musicians of another highly praised Icelandic band: math rockers Agent Fresco. This time, not only drummer Keli and bass player Vignir stepped in, but also singer Arnór Dan made an appearance to perform their song „Akkeri“. Later also rapper Kött Grá Pje entered the stage which resulted in something like a Hip Hop super group and the tremendous energy of punchy Icelandic rap, organic instruments and an absolutely enthusiastic crowd shouting along almost all songs resulted in one of the most remarkable Sónar Reykjavík 2016 moments! A perfect finish.