It´s hart to find the right words for all the experiences and beautiful impressions during Iceland Airwaves 2015. Sometimes I just close my eyes and dreaming of being back at the line to Húrra with Gull in my hand, waiting for the next gig while the rain falls down on me and the wind whistles in my ear. The atmosphere in the venues often was so warm-hearted, I forgot all about the cold weather outside. The following 10 moments are not enough to express the feeling of Airwaves. But it´s a good start.

I have to admit that No. 10 was not part of the festival but it´s worth to tell about it. It was Halloween night. Around 10 pm we walked into “The English Pub” where a cover band was playing. While I was dancing with some locals and tourists (after some Brennivín Shots) in front of the band, a good looking Icelandic guy jumped on the stage, gave a signal to the band and than rapped an Eminem Song. The crowed was going bananas while Icelandic Marshall Mathers was singing. A moment of absolute enjoyment and fun. That was another proof of how crazy and incomparable Icelandic party culture can be.

Don´t forget about the sheer beauty of Reykjavík with Laugavegur and it´s side streets. Walking trough the streets or walking nearby the ocean, passing the Sólfa (Sun Voyager) with the beautiful mountains in the background – it is just pure happiness. I booked the Walking Tour with Auður Ösp (www.iheartreykjavik.net) which was a great pleasure. Especially that Auður herself made the tour with us. She showed us spots we would never had discovered on our own. It was unforgettable and I can only recommend this tour to everyone. You should also have a look into the sky from time to time. The Northern lights show up sometimes and disappear very fast.

If GusGus is playing at Kex Hostel it´s gonna be crowded. We saved ourself a good area in front of the stage but couldn’t feel our legs anymore right before the gig started. Someone told us that there is a 500 meter line of people outside the building and they all want to see the gig. So we pulled ourselves together and got ready for GusGus. „Biggi Veira“ came to the stage, pretty feminine with high heels and Daníel Ágúst Haraldsson wore casual trousers in which he was going wild (dancing). After a while, when Högni Egilsson set foot on stage, the crowed was going bananas. Happy people dancing together to electronic beats, what is greater than that?

Andy Shauf is love. Andy Shauf ist joy and sadness in just one song. First of all Andy Shauf is a Canadian singer and songwriter with its first gig in Iceland. I had the pleasure to see his concert in Harpa Kaldalón where everyone was sitting. “Wow. It´s Saturday Night and all of you are sitting here. So we´re gonna play a little Saturday Night Party Song now” he said. A real crawlies atmosphere arouse while the band was playing and it was definitely one of the best moments at Airwaves.

Bæjarins Besztu Pylsur! It´s the best address when you feel a little hungry around midnight after partying. I can´t tell how often I have been to that place but it was super delicious every time. Don’t forget to order “einn með öllu” (one with everything). It´s the most tasteful one which gives you enough energy to get through the rest of the night.

M-Band. powerful, thrilling, dynamic, touching. Deep electronic sounds mixed with the powerful voice of Hörður Bjarnason. Together with the light effects his show seems to be from another planet. I was riveted in my seat at Tjarnarbío. His show was like a soft massage for my soul and I felt like newborn after it. I enjoyed every second and I can only hope that there will be more shows in Europe soon.

On saturday morning (1 pm), Philip took me to Laundromat Café to see Berndsen. I had no clue what to expect: a bearded Icelandic guy dressed in a pink training jacket. Admittedly we had a laced drink before. While the other guests in Laundromat enjoyed their breakfast or had their first beer, I was already dancing with Philip in front of the stage. My personal highlight: When Berndsen looked at me and sang one text line in my direction. I really love his stage performance. Full of energy and with a Berndsen CD in my bag we went on to the next venue. Berndsen = Love.

Reykjavíkurdætur! I was so exited to see those girls on stage. Reykjavíkurdætur are a group of more than ten women rapping in Icelandic language. Their lyrics have a feminist dominated point of view and are also about sexism, men and broken relationships. As soon as they come on stage and the music starts, they spreading pure energy all over the room. I saw them at NASA as well as at cozy Ìslenski Barinn. They gave everything at both concerts and once again showed that they have what it takes to play successful concerts in other European countries.

Emmsjé. Gauti. Rap Artist. Kex Hostel. It cannot be denied that Emmsjé is a pretty handsome man. But he is not only good looking and attractive, his shows are full of energy and impressive stage performances. No question that I was right in front of the stage when he was playing at Kex Hostel. The picture was completed by Hrafnkell Örn Guðjónsson on the drums. In the end, Emmsjé asked the Kexp people to better stop the live stream now, when he climbed up the boxes and jumped down when the next beat started. One incredible guy with awesome stage performance. Don´t forget to listen to the latest album “Þeyr”. And yes, you should dance while listen to it in your living room.

Vaginaboys: My personal highlight at Iceland Airwaves. On wednesday I was standing at Húrra when four guys, with white mask and t-shirts with the title “Vaginaboys” on it, came on stage and played this cool set of songs. On their website they say: “We hide our identities wearing masks because we are not in it for recognition but rather for our love of music.” (www.vaginaboys.com) Their music is a mixture of 90s electro pop with rap interludes and memorable, melancholic songs with extrem “earworm” potential. The singer – quiet shy with an attractive aura. The rest of the band is also striking but stays in the background. The complete package is working for Vaginaboys. I loved their shows at Húrra and NASA. The EP “Icelandick” is a must-have for all Icelandic Music Lovers. My favorite song “Elskan af því bara” is playing all the time at my place since I have been back from Iceland. Just listen and fall in love.

For a real Airwaves experience don’t miss the following playlist. 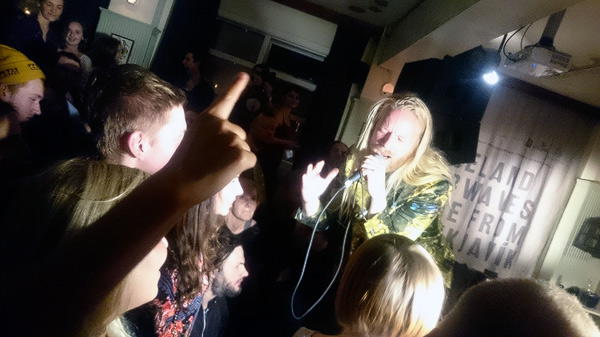 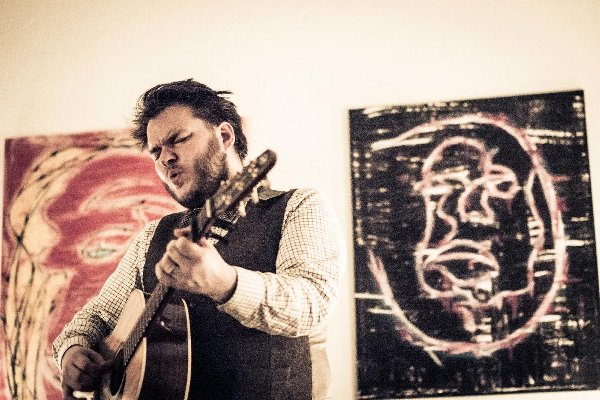