If there is one word that describes Iceland’s thriving music scene best, it might be colorful. There are artists like Teitur Magnússon or Prins Póló that might be green. There are also yellow ones like AmabAdama, Júniús Meyvant or GKR. There are some deep blue ones like Vök, Kiasmos and Samaris. And – if you want to count it as a color – there’s a lot of black of all shades of course. And in between, there are mixtures of all colors. But if there is one artist that combines really every kind of color and all the variations it might be Steinunn Eldflaug Harðardóttir, known to the Icelandic music enthusiasts as dj. flúgvel og geimskip. Which in fact means airplane and spaceship. The reason why this is the perfect alter ego for Steinunn will become clear to you after you have seen this video and read our interview!

It’s difficult to find other examples of the kind of Steinunn’s experimental electronic music. There hardly are any. The synthies are bubbling, squeaking, whistling at all pitches, underlaid by cool bass beats and accompanied by Steinunn’s jarring lyrics that tell you stories about the wonders – and scary things – of outer space. If you ever have the chance to see her at one of her live sets, you should definitely skip everything else and go for it! You will be spellbound like a small child listening to stories about distant worlds and weird creatures living in the corners of your room.

Hi Steinunn! Thank you very much for taking the time to answer a few questions 🙂 Do you think mankind will ever live on another planet and how would it look like?

I am sure we will end up living on another planet, we need to move when our sun dies so that is unavoidable (maybe you know a better word for unavoidable?).

It is impossible to know how it will be there but I guess we will find some younger sun so we don´t have to move right again, so the sun will be really bright and white . . . maybe even blue. Then I hope we will have a lot of moons to protect us, so the skies will be full of moons! Think about the nights with 7 shining moons in the sky! It will be beautiful!!! And a lot of water and funky trees in all colors and exotic space-fruits and then we will have met other aliens that will live there along with us, this will be so great!
There will be a great Sphinx living there to keep enemies away with its riddles and great Pyramids that give energy to all……It will be the great!

Hey it is spring here too…. 😀 Things are waking up and all is full of light! The smell is a bit like sand and swamp and things made of metal and glass start growing to reflect light and sound.

Who is Grandma Lo-Fi?

Grandma Lo-Fi was a great woman! She started making music at the age of 70 and made 59 albums in 7 years. There is a guinea pig singing in one of her songs, called ,,the guinea pigs”, that is my favorite of hers. She also made collage pictures , one was with a lot of women wearing cakes as hats …
When I was younger, I listened to her music and thought: if she can do it, I can do it! 😀 So her works were a great inspiration for me.

The story of Grandma Lo-Fi, who’s real name was Sigrídur Nielsdóttir, is one of those almost incredible and maybe one of the most inspiring chapters in the history of popular music in Iceland. It was even turned into a movie by Kristin Kristjánsdóttir.

Do you have pets? Maybe a guinea pig?

My sister had a guinea pig that was really cute and a great pet, but it got cancer and died of the treatment :/ . But now there are two black cats living with us (me and my boyfriend) and two fishes… there were more fishes but the cats ate them…

The style of your music and stage presence reminds me of the movie “The Fifth Element”: jarring, colorful, imaginative. Do you know it? Or of video clips from the 80s. Are you influenced by that time?

Hi! I’m happy you think of the Fifth Element! I love that movie!!! 😀 There is a great alien singing there! 😀

I dont know if I’m influenced by the 80´s…. Some of the color combination that were in fashion in the eighties are so ugly – but they are funny at the same time! 🙂 Lot of things I do are just too funny to not do them… 😀 hahahaha!!!! 😀

I like colors and lights. I tried to stop using colors! It is not cool to use all this colors, I try to do black and white videos and paintings… but when adding just one color, say neon green for example, it is just so captivating, I can not leave it out.

“The Fifth Element” is a vivid science fiction movie from 1997, starring Bruce Willis, Milla Jovovich and Gary Oldman. It was directed by Luc Besson who also wrote the story at the tender age of 16. Watch the alien singing Steinunn mentioned in the video above. A really cool scene.

Your fancy video clips are remarkable and unique. Are they produced/created by yourself? Do you have a team around you or is it all DIY?

It is all DIY just because I like to do things right when I think about them so I have no time to ask others to do them with me or help. Also it costs nothing to make the things by yourself…

But I am working with others now! 😀 My best friend Gulla made the last video – (Hellirinn bíður/ The cave is waiting) and Im going to a studio with others for the first time tomorrow to see what happens… 1 + 1 = 3.

Do you already have something like a fixed idea from the beginning when you write a new song or is it emerging from the process of creativity itself? Like just trying out new things and turn them into a song?

It is just like you said, I have no clue about how the song will be. I just start making some cool bass sound or drums and then I add other sounds and in the end I sing something 🙂 The songs make themselves out of the sounds around them. It’s like, I make some sound on a synth or I find it on the keyboard, and then some melody comes along with the sound.

You describe your music as horrorelectronic music and your lyrics are Icelandic…I know a little from last years Airwaves (e.g. the story about the drum slave of the song Trommuþrællinn you played at Slipparinn) but can you tell us what your lyrics are mainly about and where you get your ideas from for them? Are they creepy and horrifying?

It just happens when I make the songs, they turn into horror stories.

The lyrics are most of the time just me singing something and recording at the same time. Then when I listen to what I recorded I was singing about evil aliens, shadows coming to life or something like that. I guess that is because these things interest me and they are in my mind so they come up when I’m not thinking about anything and just letting the word come out as I sing…

But now I’m making texts in English because I travel a lot and only a small part of the people in the world understand Icelandic.

But about the lyrics… I read a lot about symbolism. I got my first Tarot cards at 11 and then I started to see how one thing can symbolize many other things. So my texts stand for other things than just the dictionary explanation. And I don´t like to tell people what I was thinking exactly, both because sometimes I’m not sure myself, and also so they can find their own meanings in the song. It differs a lot between concerts what stories I tell about each song.

Sometimes, because symbolism is so deeply rooted in my mind, I don´t know what I am singing about until many years later! So I have not yet seen what the drum-slave song is really about. But some of the songs I now understand and I think: OMG! Did I really sing about this in front of audience? Hahahaha 😀

My influences are many things: like Tarott, 1001 night, mysterious things that are not teached in schools , youtube documentaries about outer space and ancient times, and lately, The Cult of Nick podcast.

What are you working on right at the moment? Do you have other projects next to the one as captain of flugvel og geimskip?

I am making a video for dj. flugvél og geimskip and also working with other musicians here in Iceland like Muted and Reykjavíkurdætur. I´m in 3 other bands: Skelkur í bringu (rockband – we are making a new album/record at the moment), Smurjón (also recording right now) and SPARKLE POISON.

I also paint in the evenings. I like to do that, and people buy the paintings so I can buy new instruments and food…

Now I notice that there is a lot going on! 😀 But that is good: adding stuff to the world!

I just started recording a new dj. flugvél og geimskip album in english, so more people will understand the lyrics. I’m also making a computer game but that is going really slowly because I only took one course in it and I don´t have a good PC computer…

What are your favourite icelandic acts?

Takk fyrir, Steinunn! It was a pleasure to get to know you and your music better! 🙂 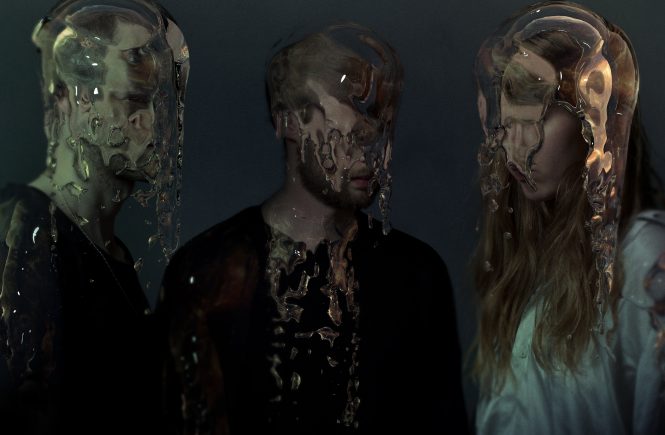